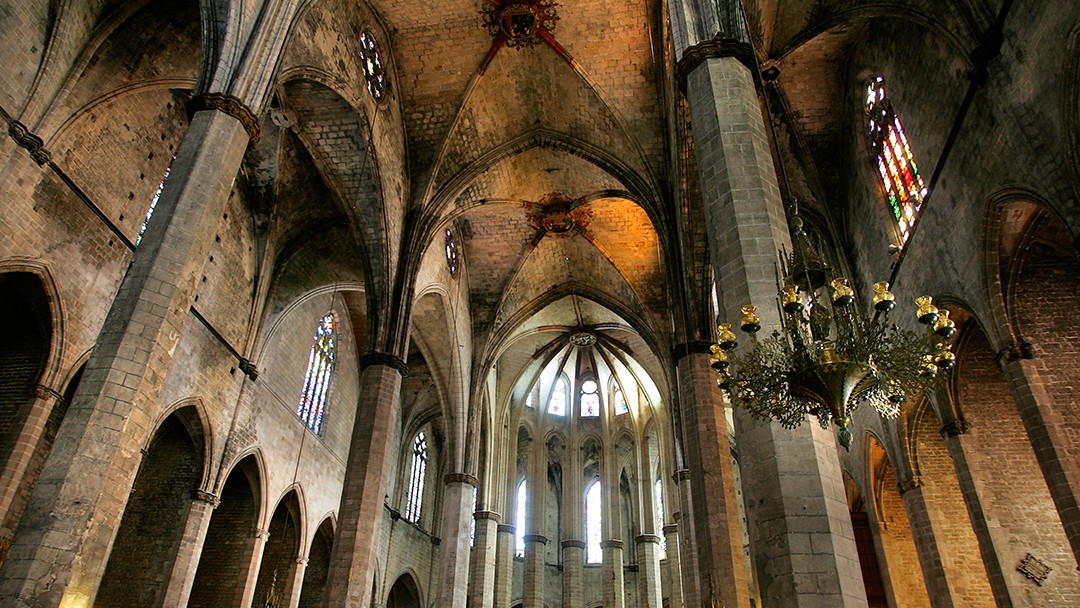 Rising gently towards the heavens among the 19th century buildings of the El Born i la Ribera neighbourhood, Santa Maria del Mar is pure Gothic architecture.

In 1329, the mariners’ guilds in La Ribera placed, on their own initiative, the first stone of what is considered the only entirely finished Catalan Gothic building: the church of Santa Maria del Mar. 55 years later, in 1383, and without the work being interrupted once, the doors of this great church opened. A temple which, through the years, and thanks to the success of Ildefonso Falcones’s novel, has come to be known as The Cathedral of the Sea.

Santa Maria del Mar is emblematic and unique, with three great naves of almost the same height, and columns every thirteen metres, a distance that was never exceeded in any medieval building.13 The whole building gives the sensation of being light and airy, spacious, and there is a notable lack of ornamentation. There are no ogival arches or filigree, and the flying buttresses are delicate. It is pure Catalan Gothic art. Only the light that filters through the stained glass windows adorns this basilica.

To go through the doors of Santa Maria del Mar is to find yourself amid the grandeur of the church, a marvel of construction. So much so, that according to reports, it was here that Antoni Gaudí was inspired to create the Sagrada Família.

Today, Santa Maria del Mar, nestling among the narrow streets of El Gòtic, surprises visitors as they turn the corner. The serenity that it transmits makes you think about the harbour porters, and the humility of the sea workers that managed to put up this cathedral in the middle of a sand pit.